Ravangla – The Kingdom of Clouds and Hills

Ravangla is a quaint little town nestled in the hills of South Sikkim and with its serene atmosphere and pleasant weather, it serves as a great destination for the city souls to unwind. We had planned our stay in Ravangla for 3 nights and wanted to visit Namchi in this time. It was around 3pm when we reached Ravangla and an abrupt rain greeted us as soon as we stepped out of the vehicle. We were in a quandary about what to do in the rain when the jeep driver came forward and suggested us to take a taxi to the hotel as the rain did not seem to stop soon. He talked to a taxi driver, bargained for us and ensured that we got the vehicle at a reasonable price. We were amazed at his hospitality as we seldom see such people in cities who come forward to help without asking when they have nothing to gain from it. We checked in to the hotel and had hot momos and ginger tea that provided great relief in the cold weather. As evening approached, mist engulfed the surrounding and incessant rain resulted in drop in temperature. We went to bed early hoping that the rain would stop by the next morning. 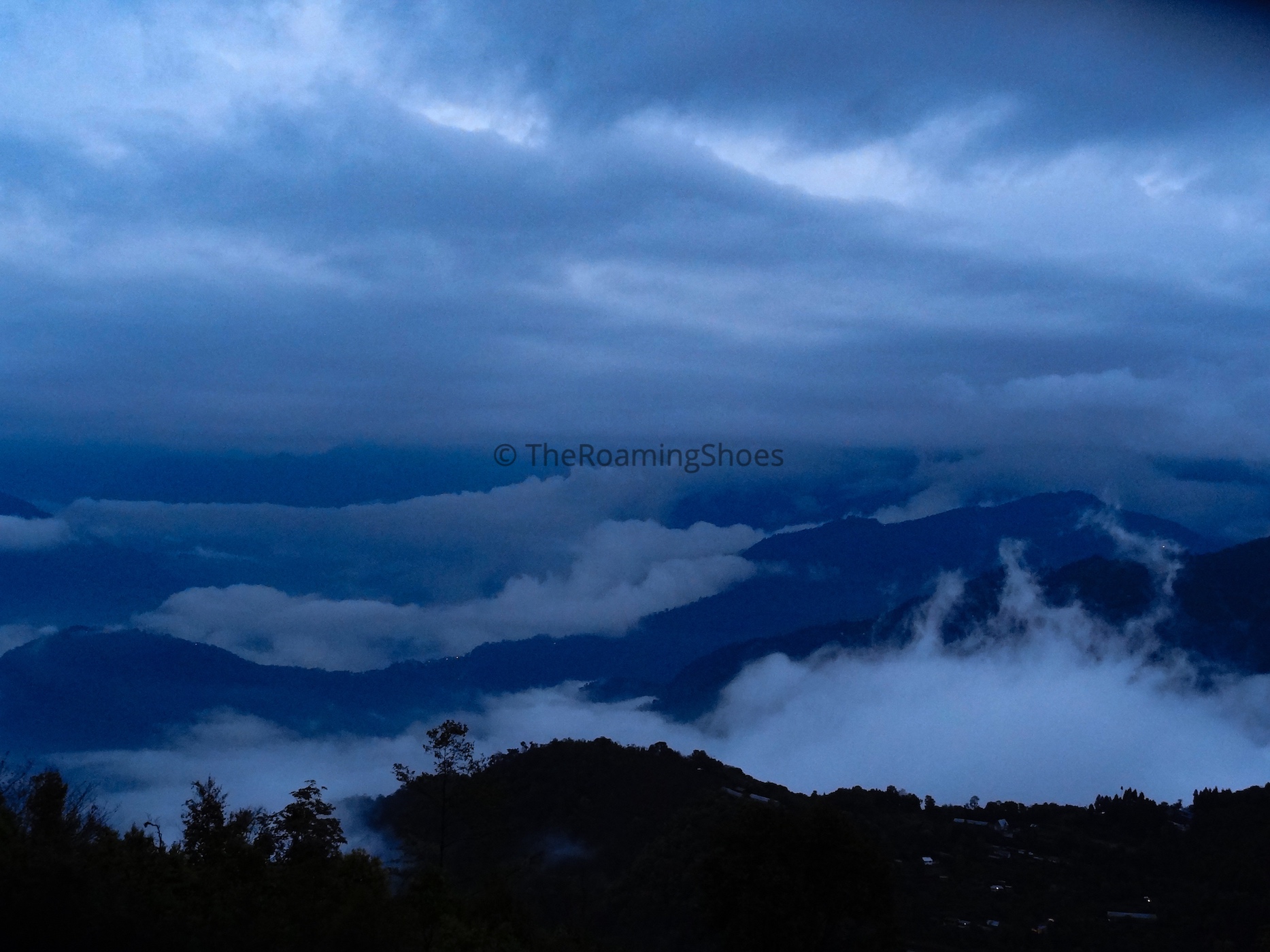 A cloudy evening at Ravangla

I was quite disappointed when I woke up to the sound of rain, but the mist covered Ravangla, the thick white clouds touching the mountains and the chirping of birds up-heaved my mood very soon. The hotel staff assured us that the rain would stop soon as it happens like this in the hills when a sunny day suddenly turns cloudy and a rainy morning becomes sunny after sometime. We had an yummy Tibetan breakfast and started for Namchi sightseeing. There are mainly 4 attractions in Namchi that most people visit; Samdruptse, Char Dham, Shirdi Sai Temple and Temi Tea Garden. We started with Samdruptse which has a big statue of Guru Padmasambhava in sitting position. The place has a monastery under the statue with a beautiful interior and a very tranquil atmosphere. There was a myriad of pink, red and purple flowers that adorned the surrounding area and many colorful birds kept flying in and out of the nearby trees. After spending an hour clicking pics and savoring the beauty of the place, we moved towards Char Dham. 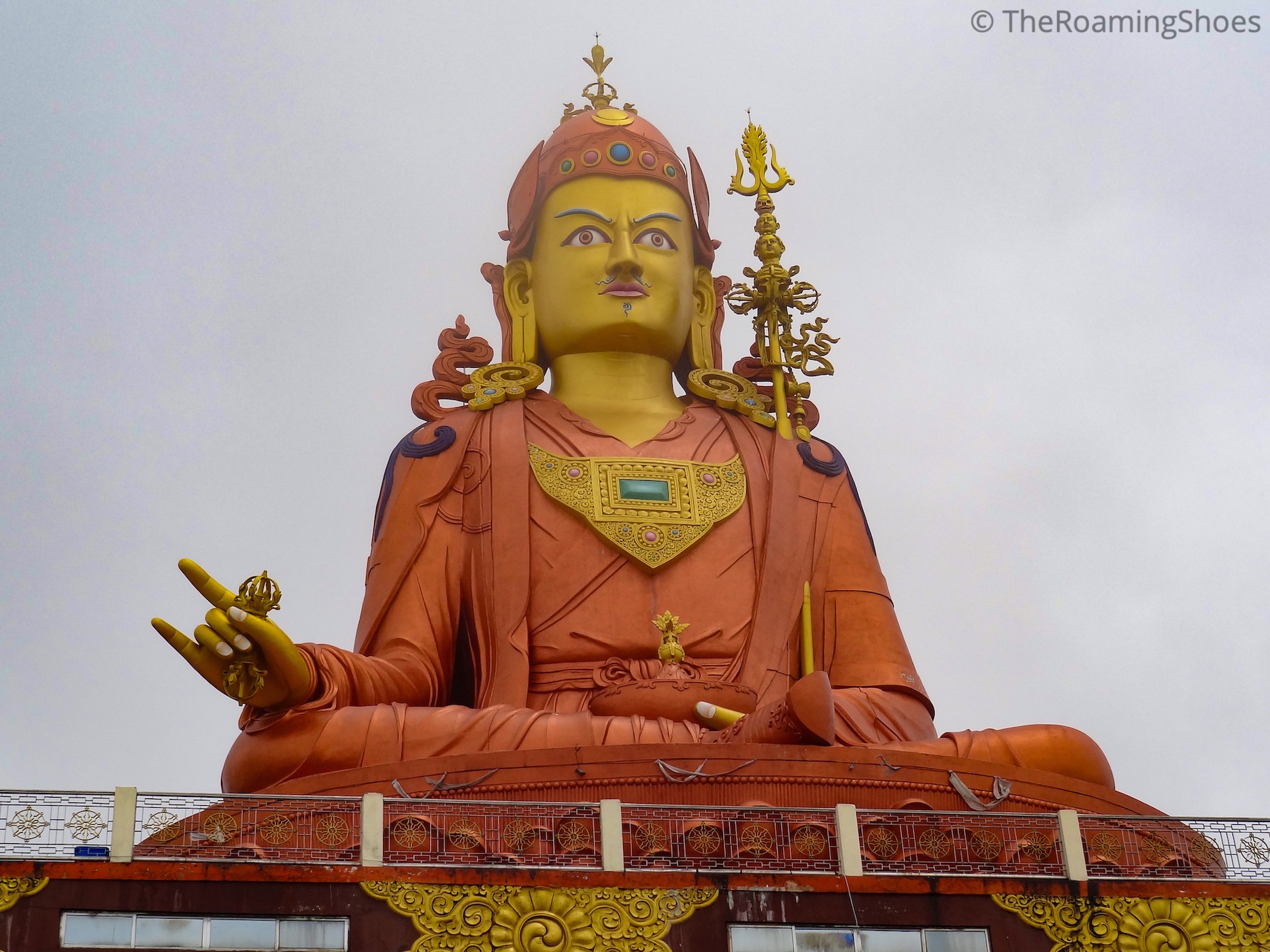 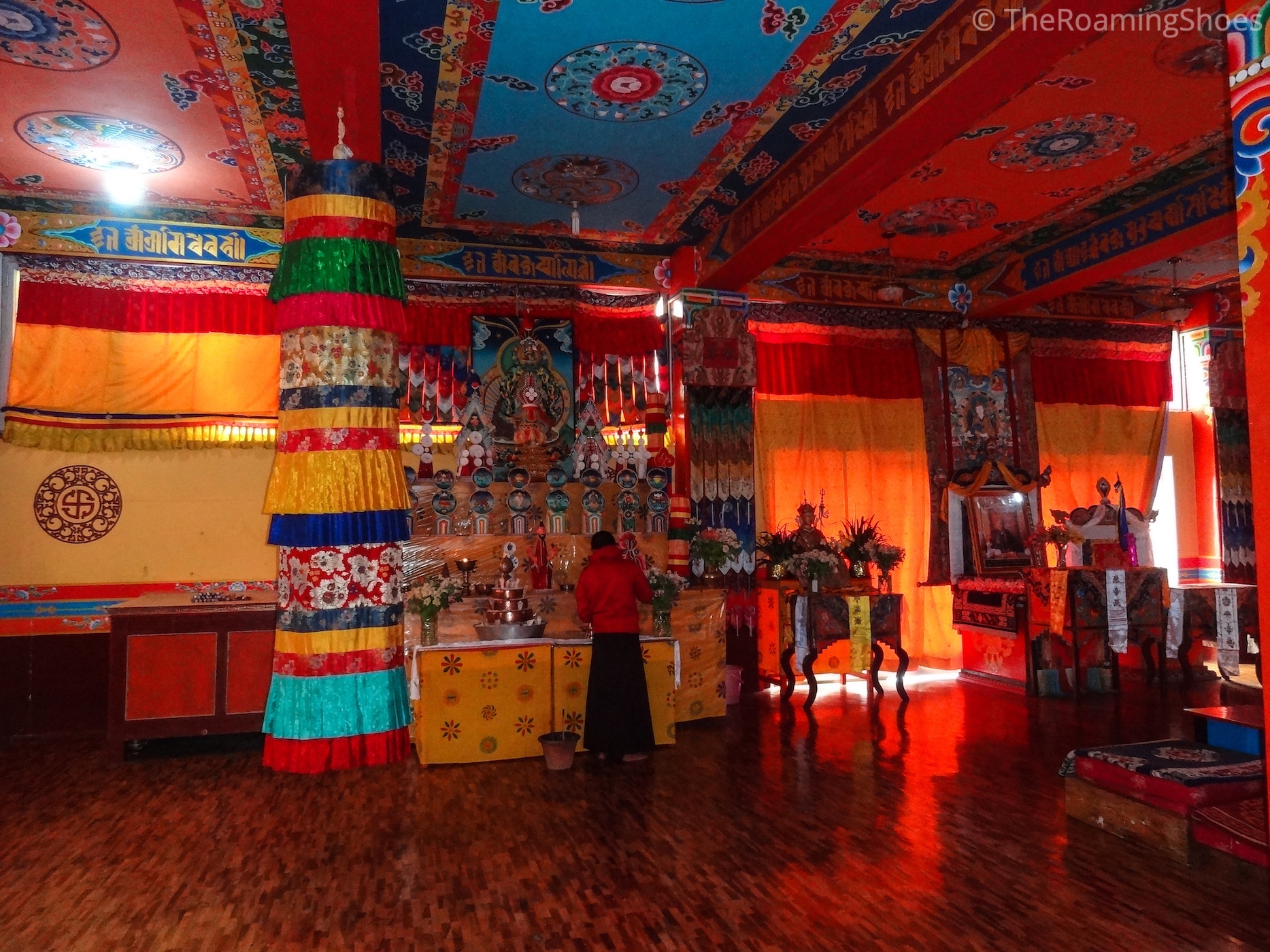 Char Dham is the spiritual center of Namchi having a big statue of Lord Shiva that could be seen from a distance. It is a huge complex perched on a hill containing the replicas of the char dhams which are revered by the Hindus such as Jagannath Dham, Dwarika Dham, Rameshawaram, and Badrinath Dham. It also houses the 12 famous Jyotirlingas and few other temples like Shirdi Sai temple, Minakshi temple etc. The complex is very well maintained with a neat and clean surrounding decorated with many flowering plants and has drinking water and toilet facilities. There is a canteen in the complex and lodging facilities are available too. If you are a spiritual person, then the divinity of the place will surely enchant you whereas for others the place provides great views and photography opportunities. When we visited Char Dham, the whole place was covered in mist and the light drizzle added to the heavenly feeling. We spent around 2 hours in that place and then moved towards Shirdi Sai temple which was just 5 minutes drive from Char Dham. 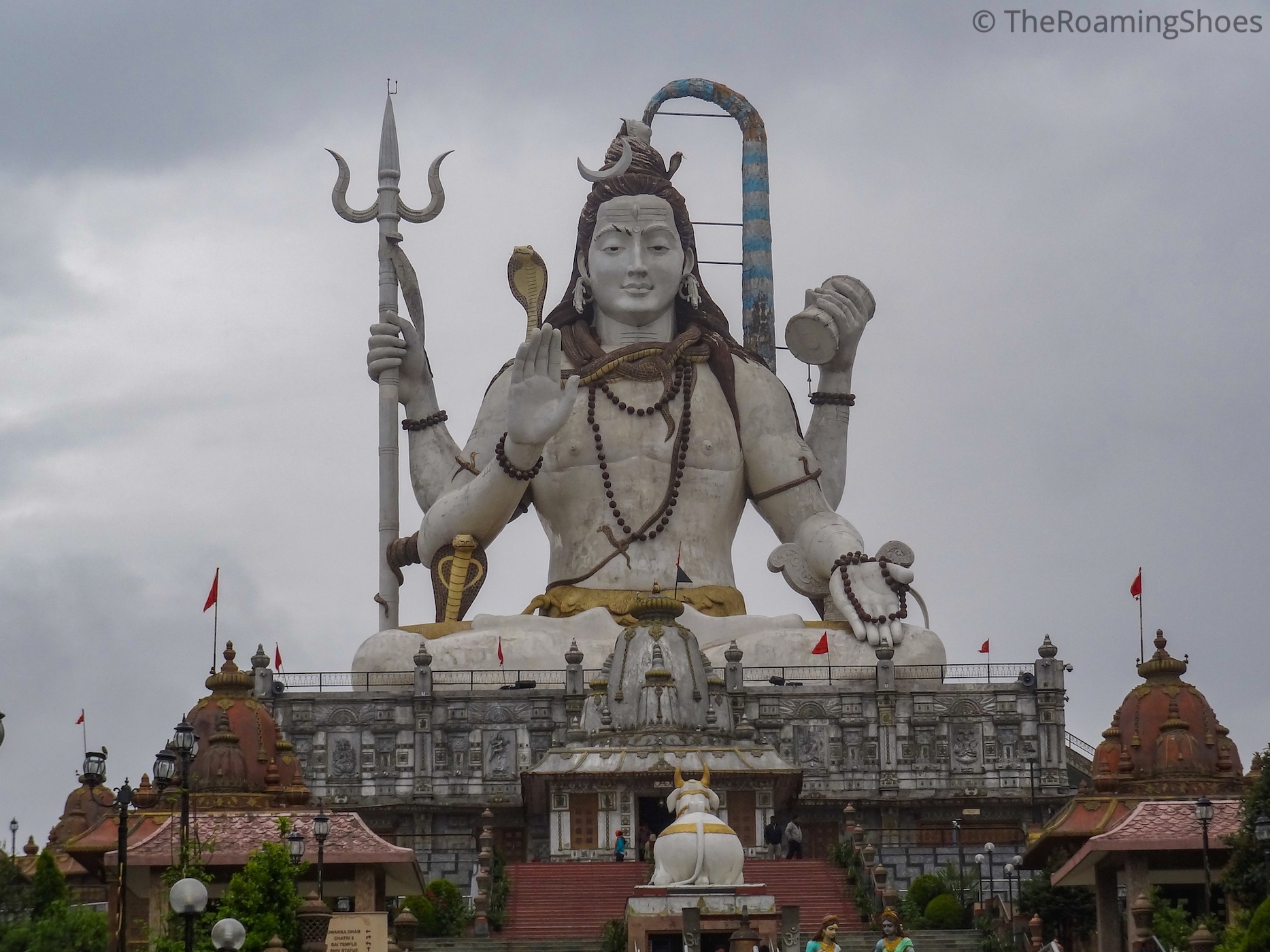 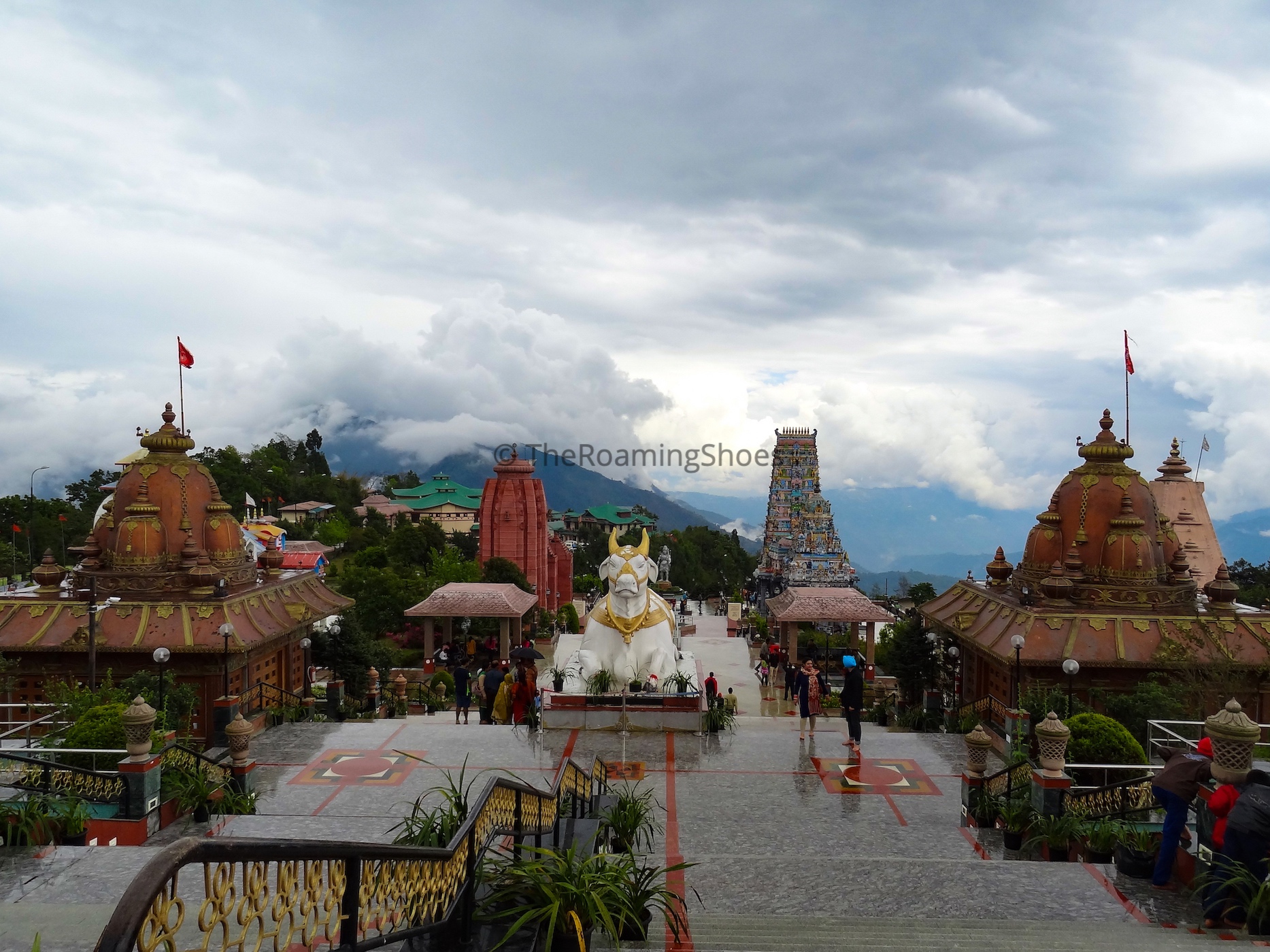 Shirdi Sai Temple is a very aesthetically designed two story building having a statue of Shirdi Sai Baba in the 1st floor. There is nothing much to see here unless you are a devotee of Sai Baba. The temple has a very peaceful atmosphere to sit and meditate a while. After visiting the temple, we had lunch in a nearby restaurant and started for our last destination of the day that was Temi Tea Garden. We were not very interested about seeing the tea garden as we had already seen many beautiful tea gardens in Munnar, Kerala. But when we reached the tea Garden, we were happy about including the place in our itinerary. Temi tea garden is the only organic tea producer in the whole of Sikkim and it consists of a huge area. The view of the lush green tea garden spread on the mountain slopes under the cloud patched blue sky and with a background of Kanchenjunga range was a treat to the eyes. If you love photographs, then this the place you should not miss. Also, you can get yourself photographed in the traditional tea picker’s dress which is available on rent near the tea garden. There is a narrow steep path to climb down to the lower part of the tea estate and we followed this path to go near the Cherry Resort which is a beautiful property amidst the sprawling tea plantations. After clicking many pictures to our heart’s content we came back to the upper part of the garden and had tea in the nearby cafe. This shop also sells the organic tea which we found to be very expensive. But having a cup of hot tea in a cafe with a view of tea garden was an experience to cherish. 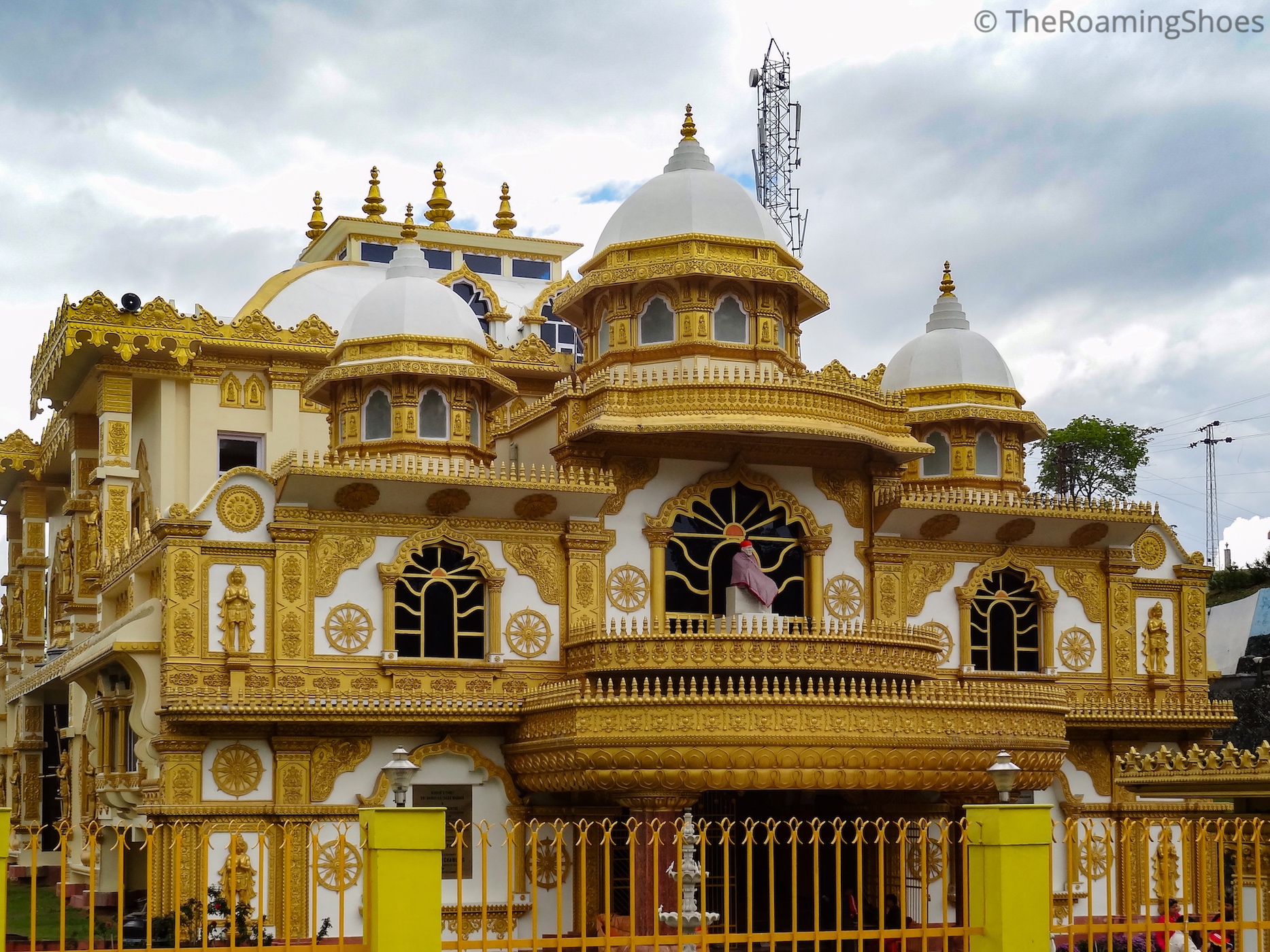 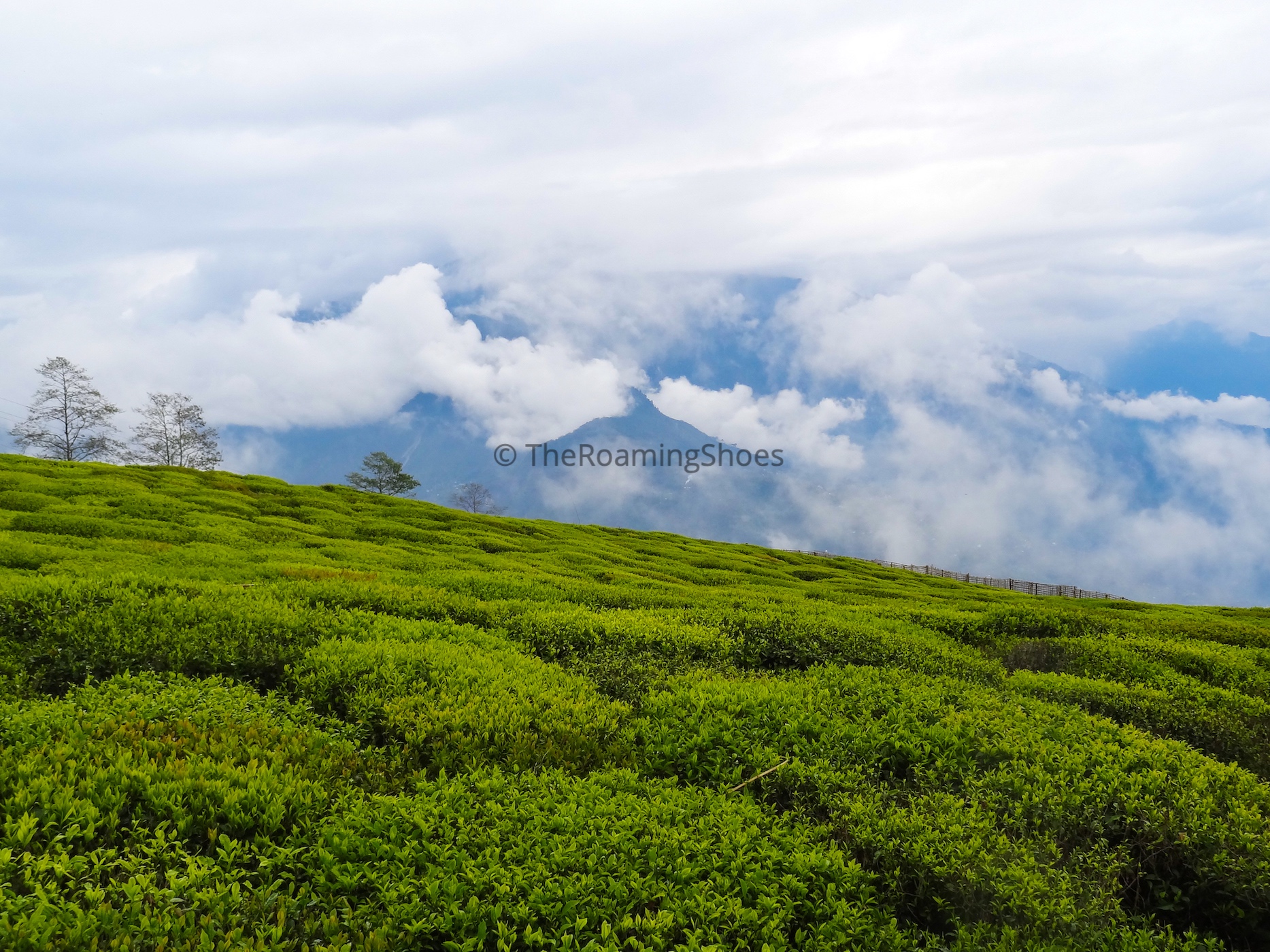 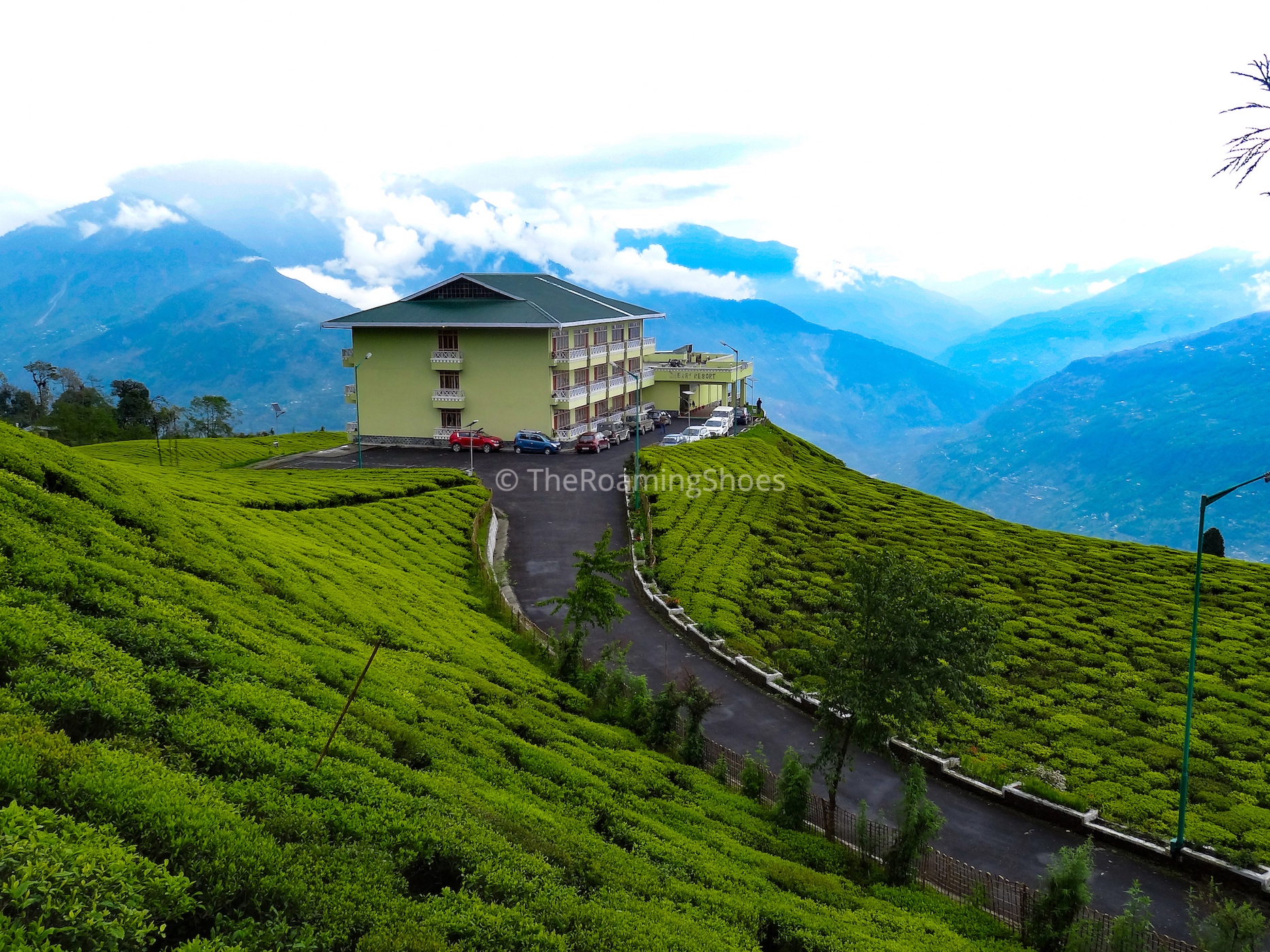 We reached hotel at around 5 pm and by that time sky had got clearer and Kanchenjunga range was partially visible through the veil of clouds. The sun went down in some time and the view of the valley in the twilight with patches of clouds floating over it created an impression of a fairyland that I always dreamed to visit. Night came with numerous twinkling stars in the sky and I was so euphoric that I felt like singing that “twinkle twinkle little star…” rhyme from childhood. Yes, I was overwhelmed like a child and I bet you would have felt the same too, because i could not remember the last time when I saw those many stars in the pollution and lights of the city. The stars of the sky and the lights in the hills together created a mesmerizing effect and it felt as if the sky has come down to meet its long time love earth pushing all the boundaries. It was an experience to savor and my heart said this is where paradise resides. 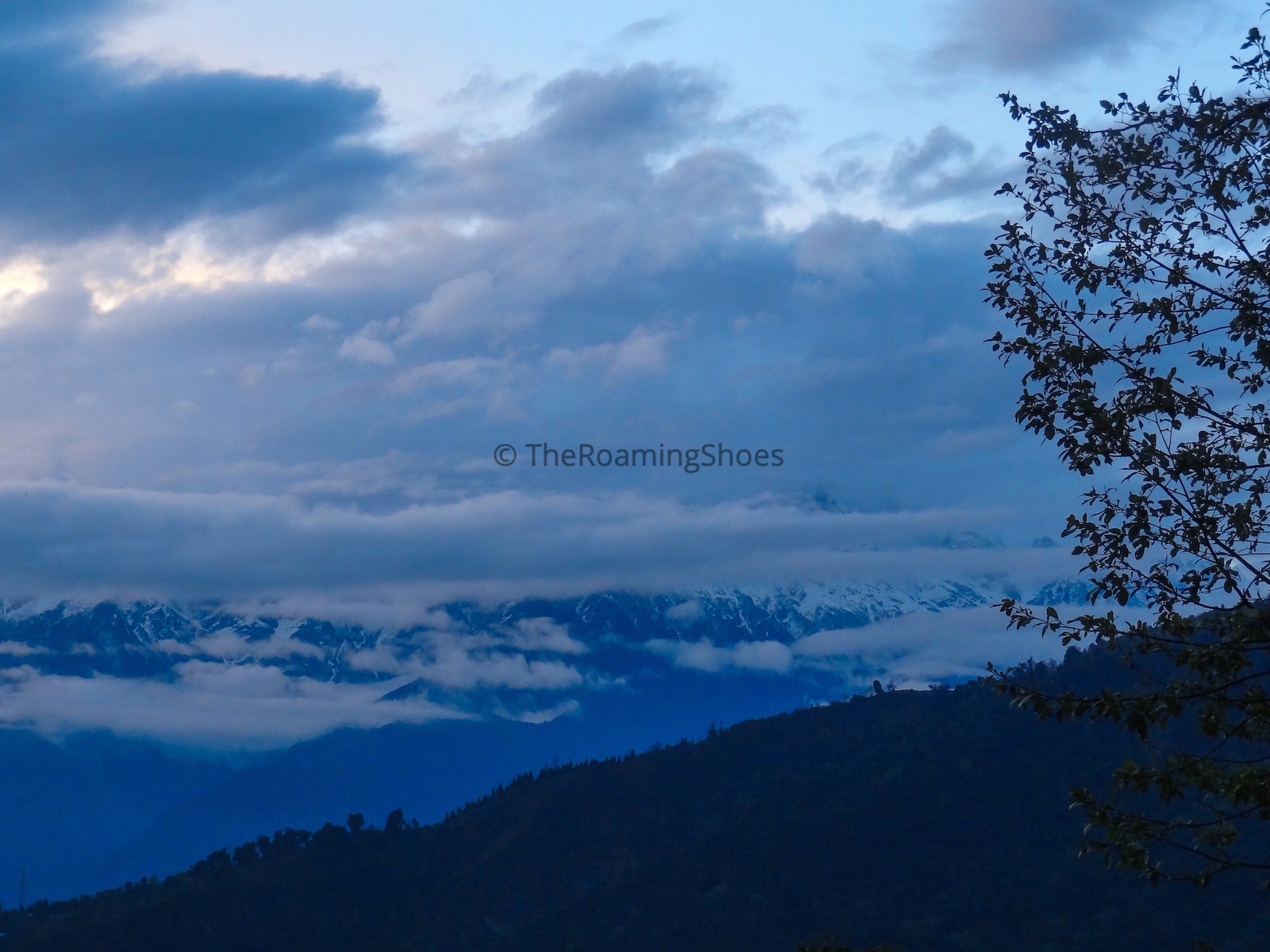 View Of Kanchenjunga in the evening 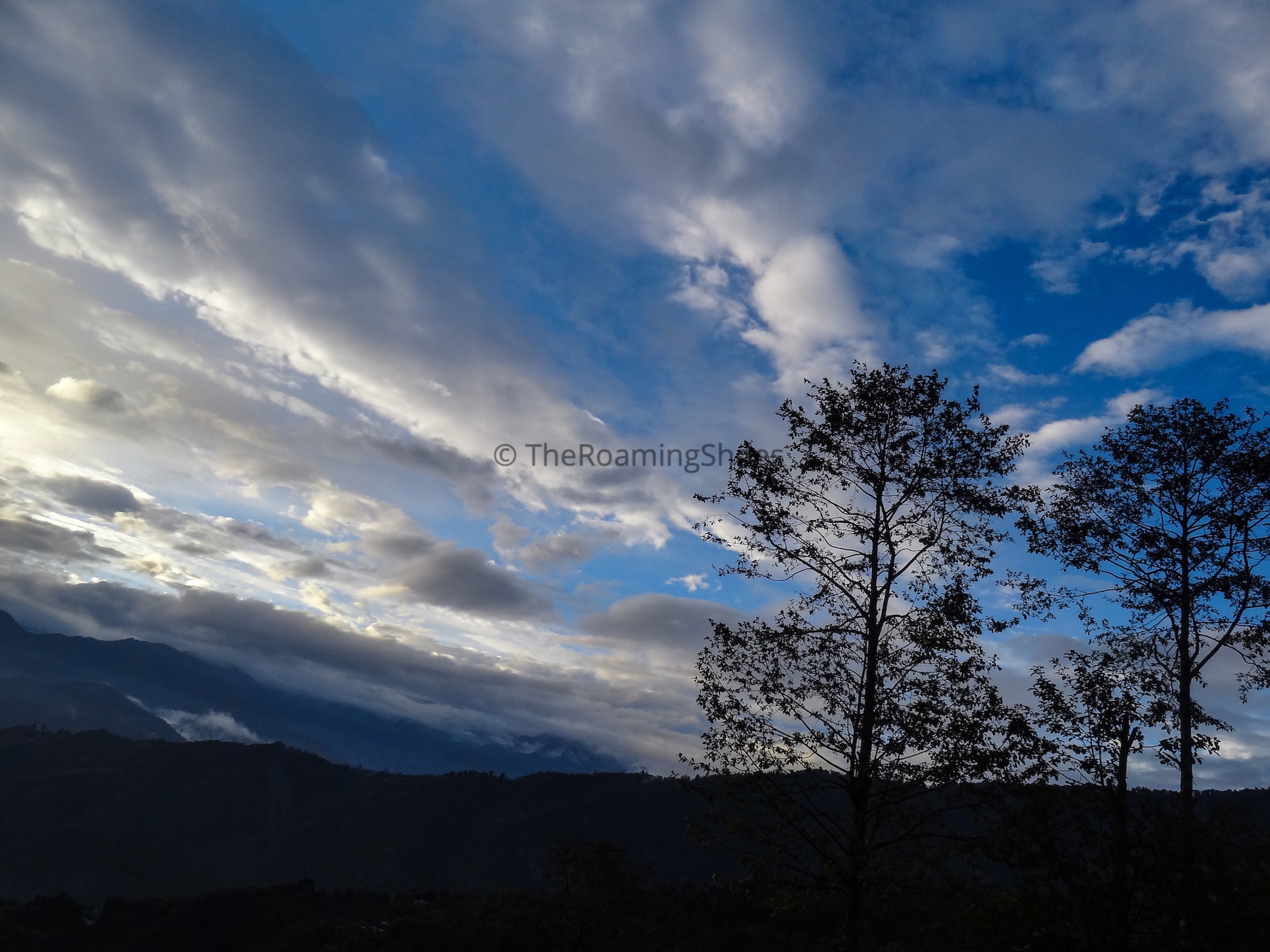 The next morning we woke up to the grand view of Kanchenjunga range shining in the sun light; there was no mist, no clouds, only azure sky and verdant hills. It was a lovely morning, but we failed to wake up in time to enjoy the sunrise. After having breakfast, we started for Ravangla sightseeing. Ravangla does not have many places to see, but it has everything that a nature lover needs, starting from beautiful views to many exotic birds. We had decided to visit the 2 main attractions of Ravangla that were Buddha Park and Ralong Monastery. Buddha Park takes around 15 minutes from Ravangla market by car. It is a huge park with a large statue of Lord Buddha in sitting position in the middle of the park. When we reached the park, we were absolutely spellbound seeing the golden Buddha statue shining like gold with a backdrop of mighty Kanchenjunga standing like a tall white wall. The surrounding walls of the park have been beautifully decorated with many flower pots and the park is very well maintained with green lawns having benches in between. There is a temple underneath the statue having a small Buddha statue inside and the walls of the temple are beautifully painted depicting Lord Buddha’s life story. The prayer wheels, the colorful prayer flags, the huge decorated pots filled with water, the slow playing chant of “Buddham Sharanam Gachhami” and the soothing cool wind created a heavenly feeling. We spent around 2 hours in the place enjoying the ethereal beauty and capturing it in our camera before leaving for Ralong Monastery. 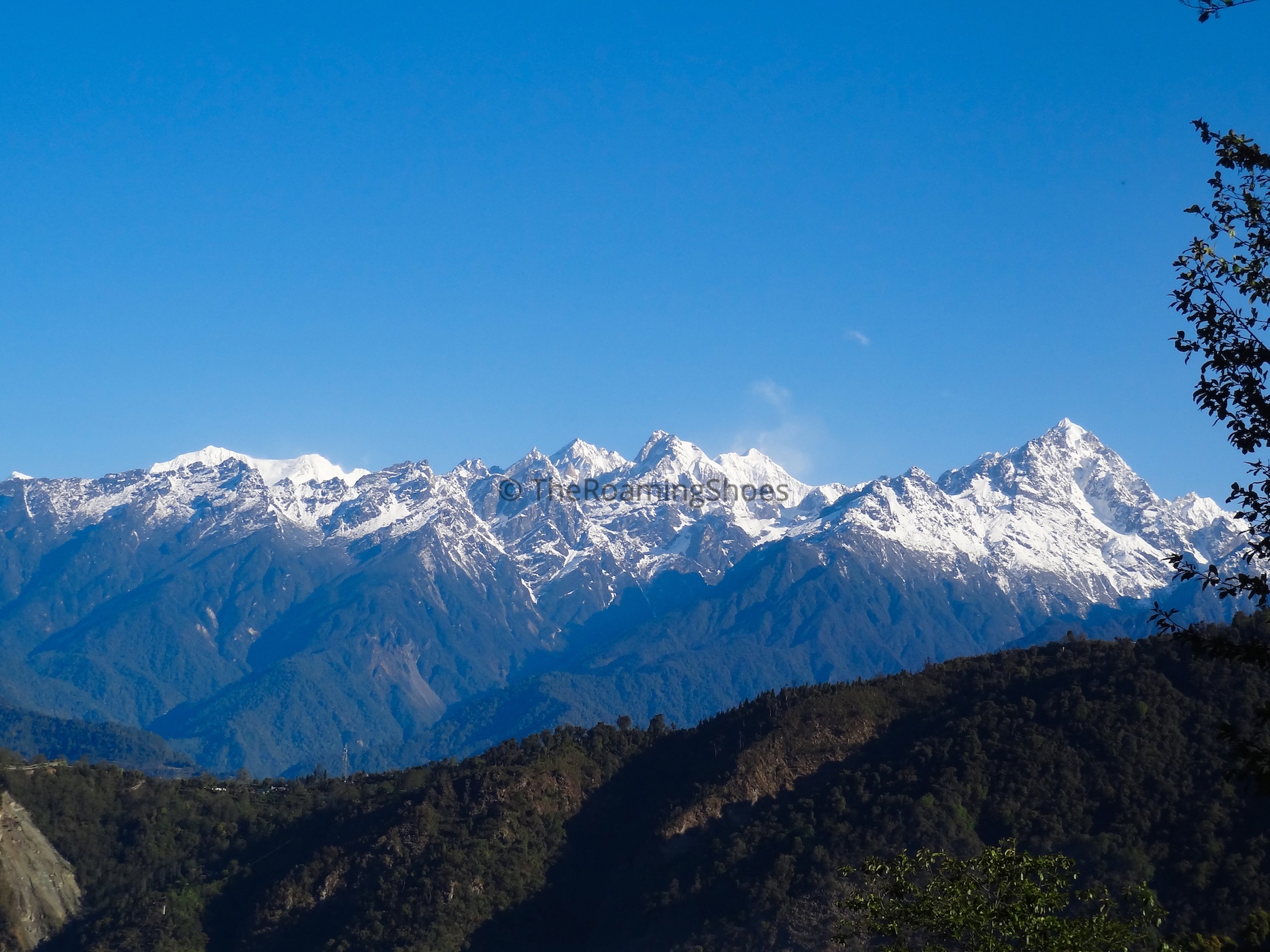 Morning view of Kanchenjunga from Ravangla 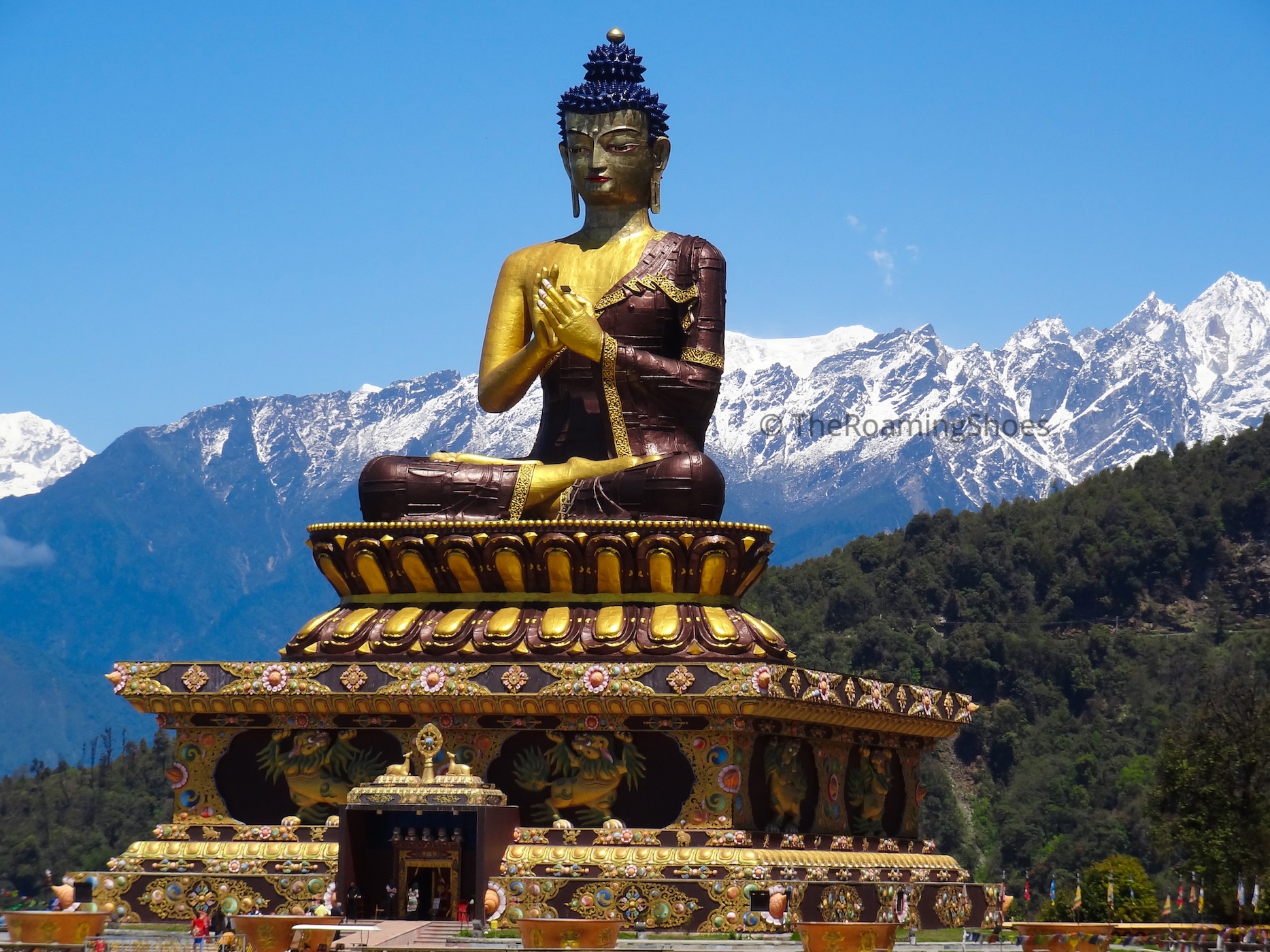 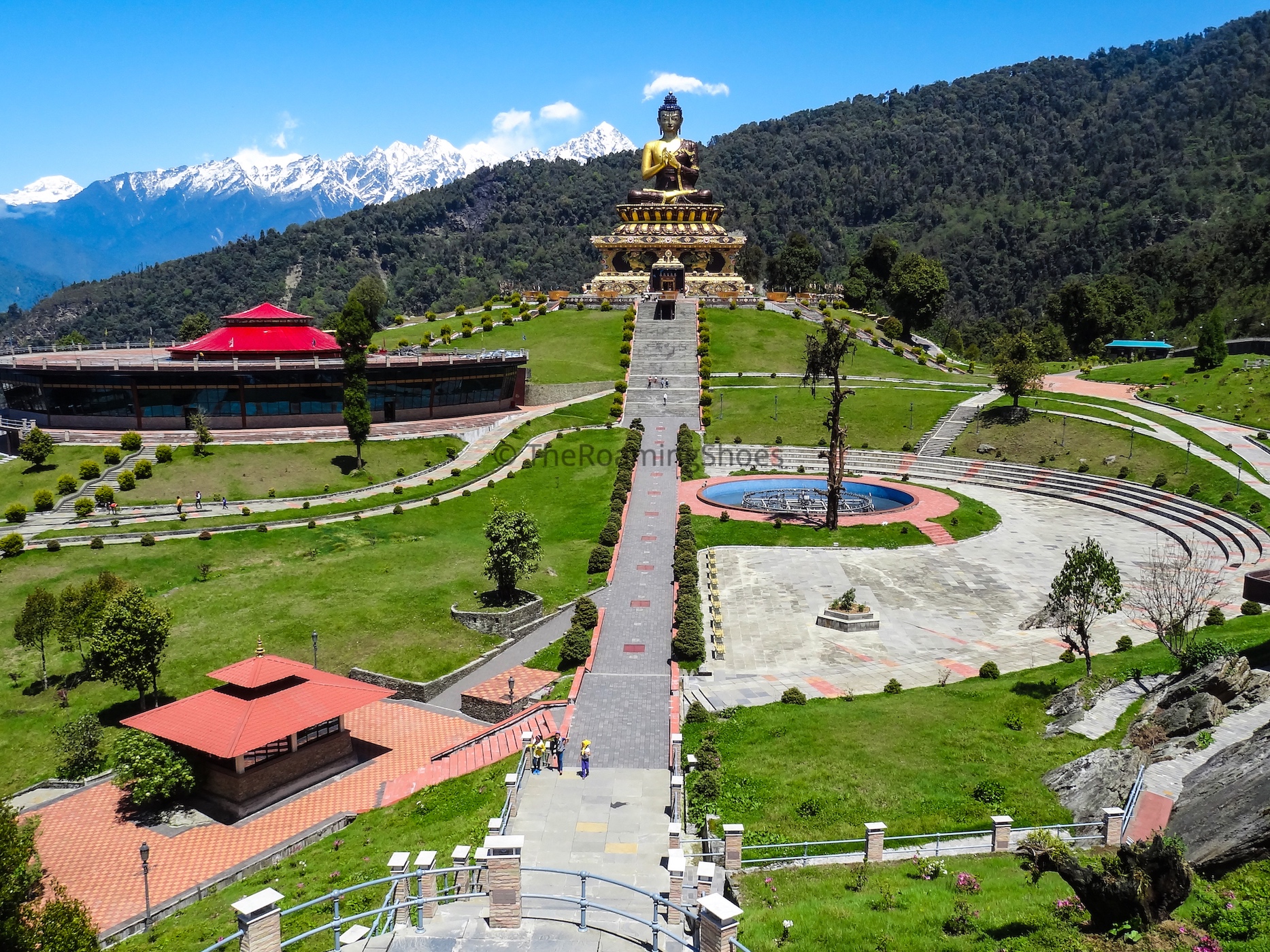 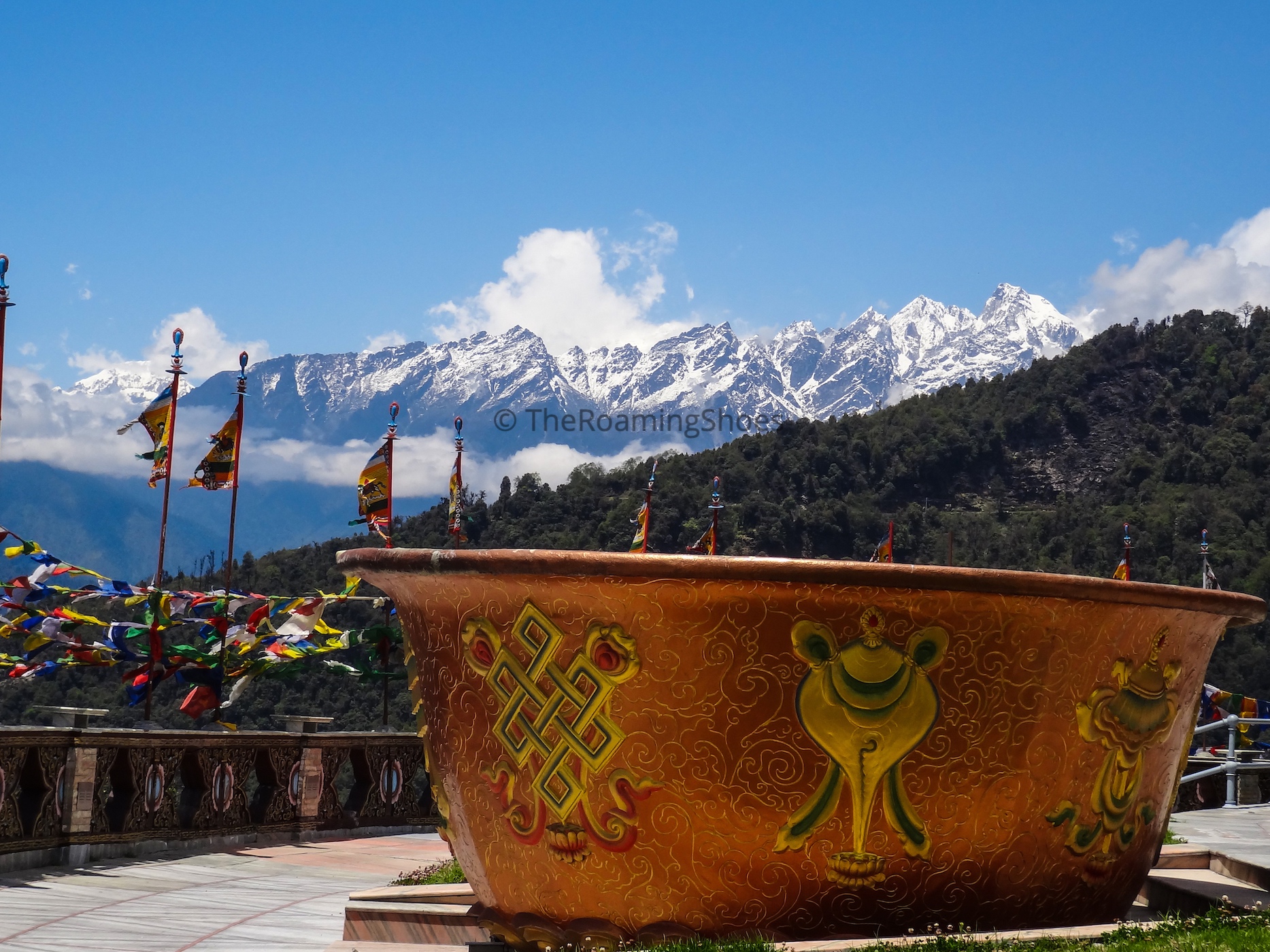 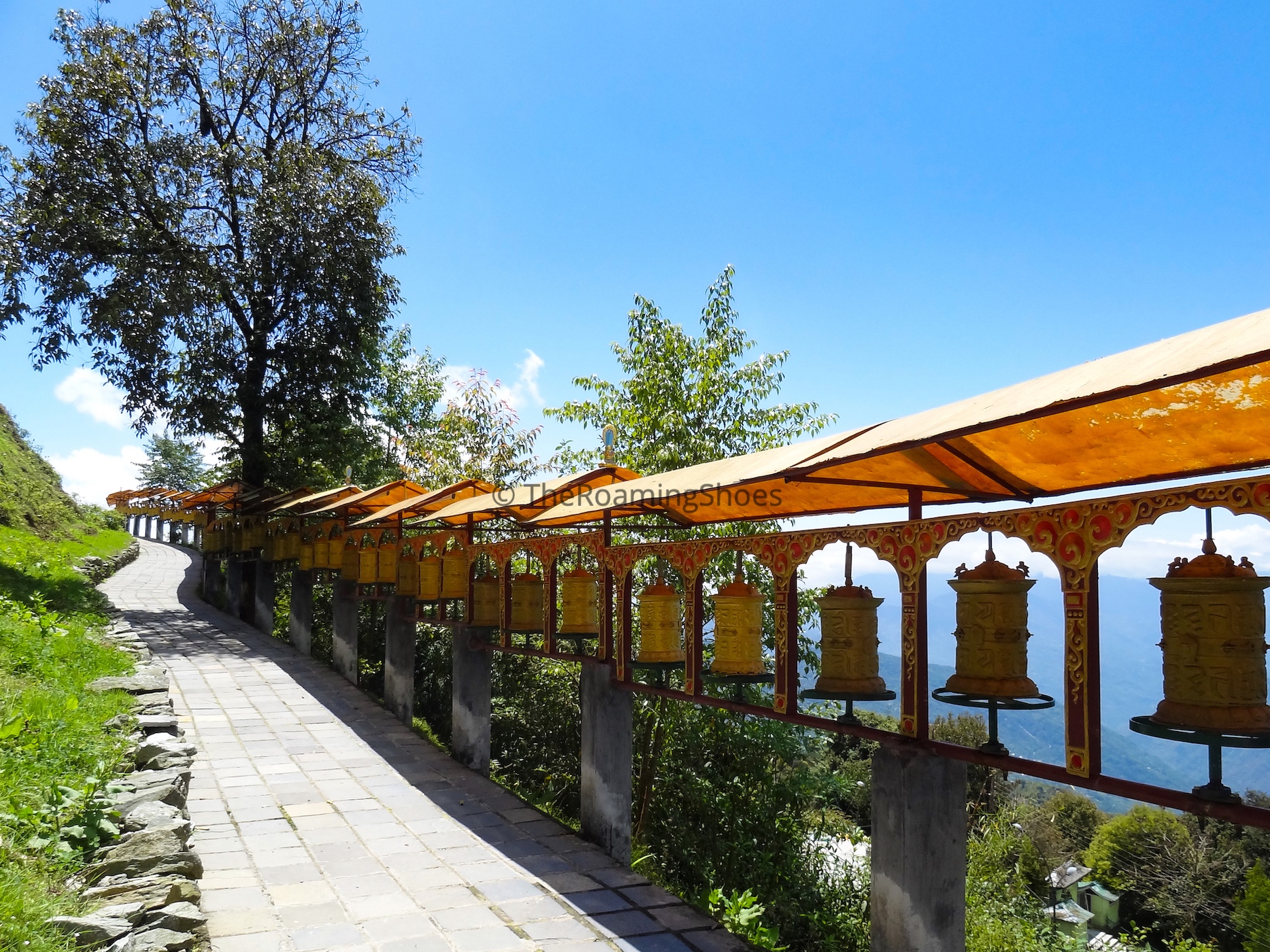 There are 2 Ralong monasteries in Ravangla, one is New Ralong Monastery and the other is Old Ralong Monastery and we had thought of visting both. It took us around 20 minutes to reach the New Ralong Monastery from Buddha park through a very scenic road. This is the most beautiful monastery we had ever seen and its location largely contributes to it’s grandeur. You can see the Kanchenjunga range clearly at the right side of the monastery. It was around 1 pm when we visited the monastery and we were very lucky to see  so many monks of various ages offering their prayers. The sound of the chants were so soothing that we wanted to sit there for hours listening to them. The monastery was quite big and was decorated magnificently with many beautiful thangkas and murals relating to Buddhism. Outside the monastery many benches were set up where one could sit for hours looking at the beautiful surrounding or simply doing nothing. The old monastery was hardly a 5 mins drive from the new one, but we could not go inside it as there was some construction work going on. We clicked a few pics from outside and came back to the hotel. 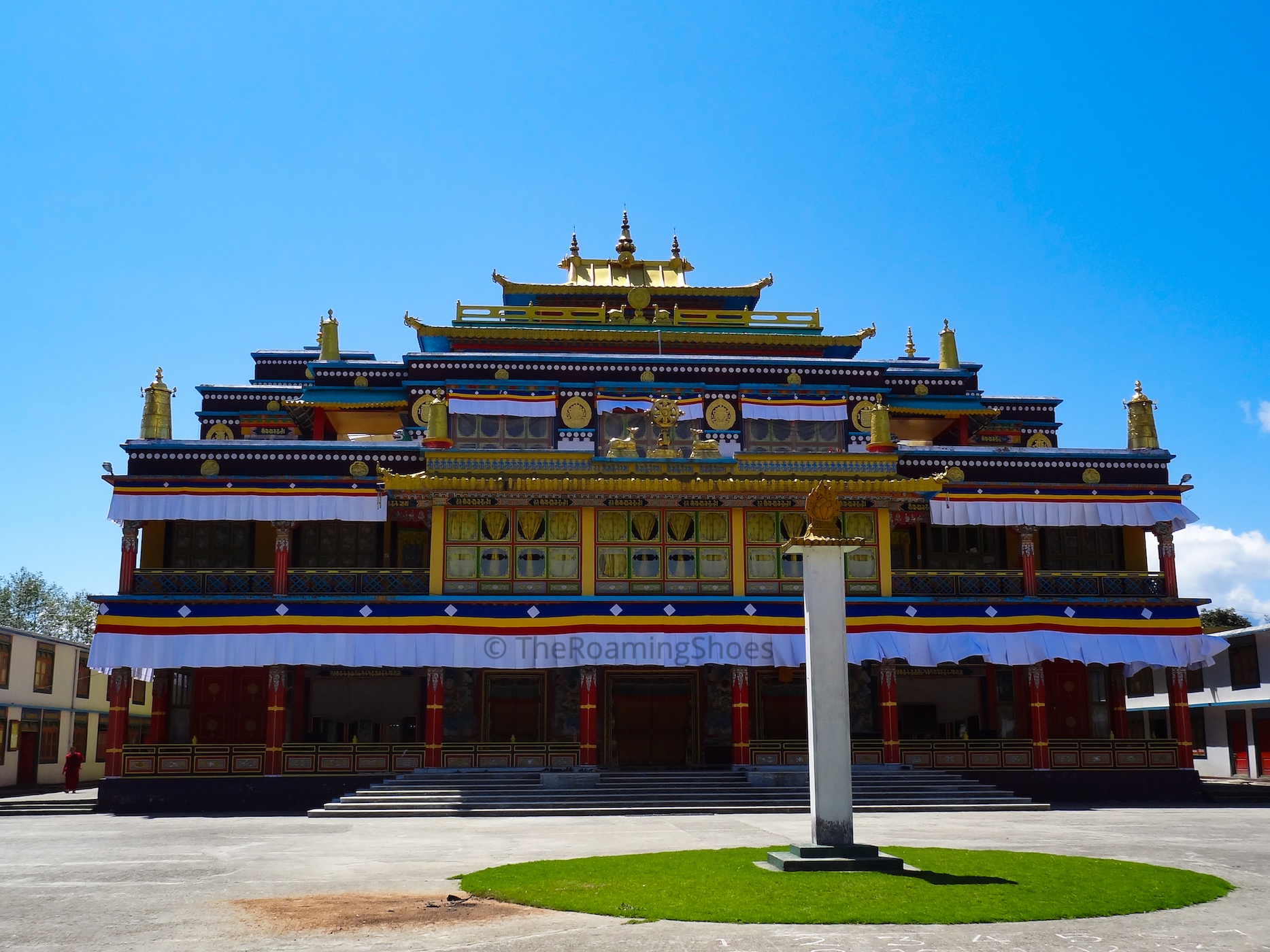 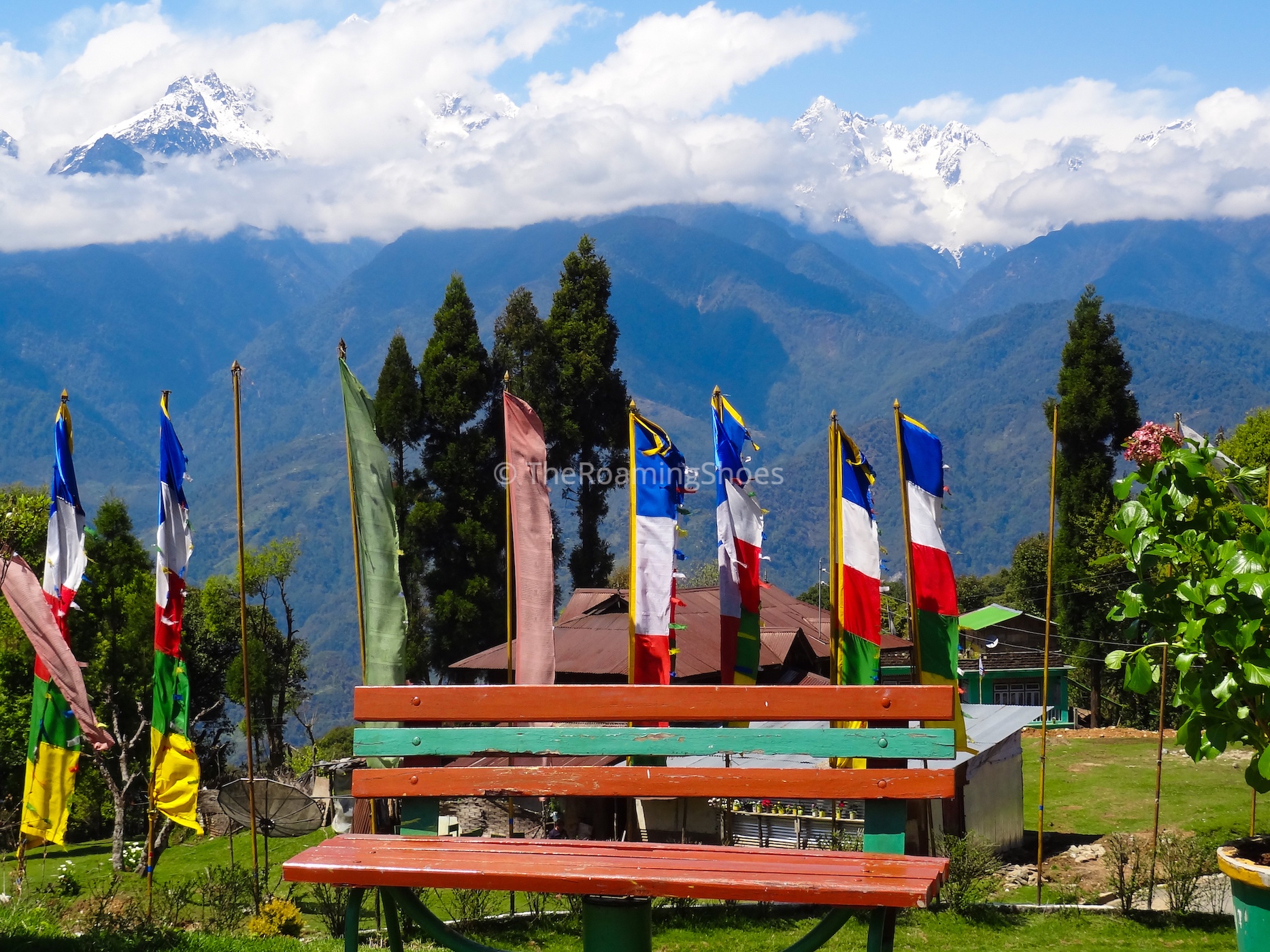 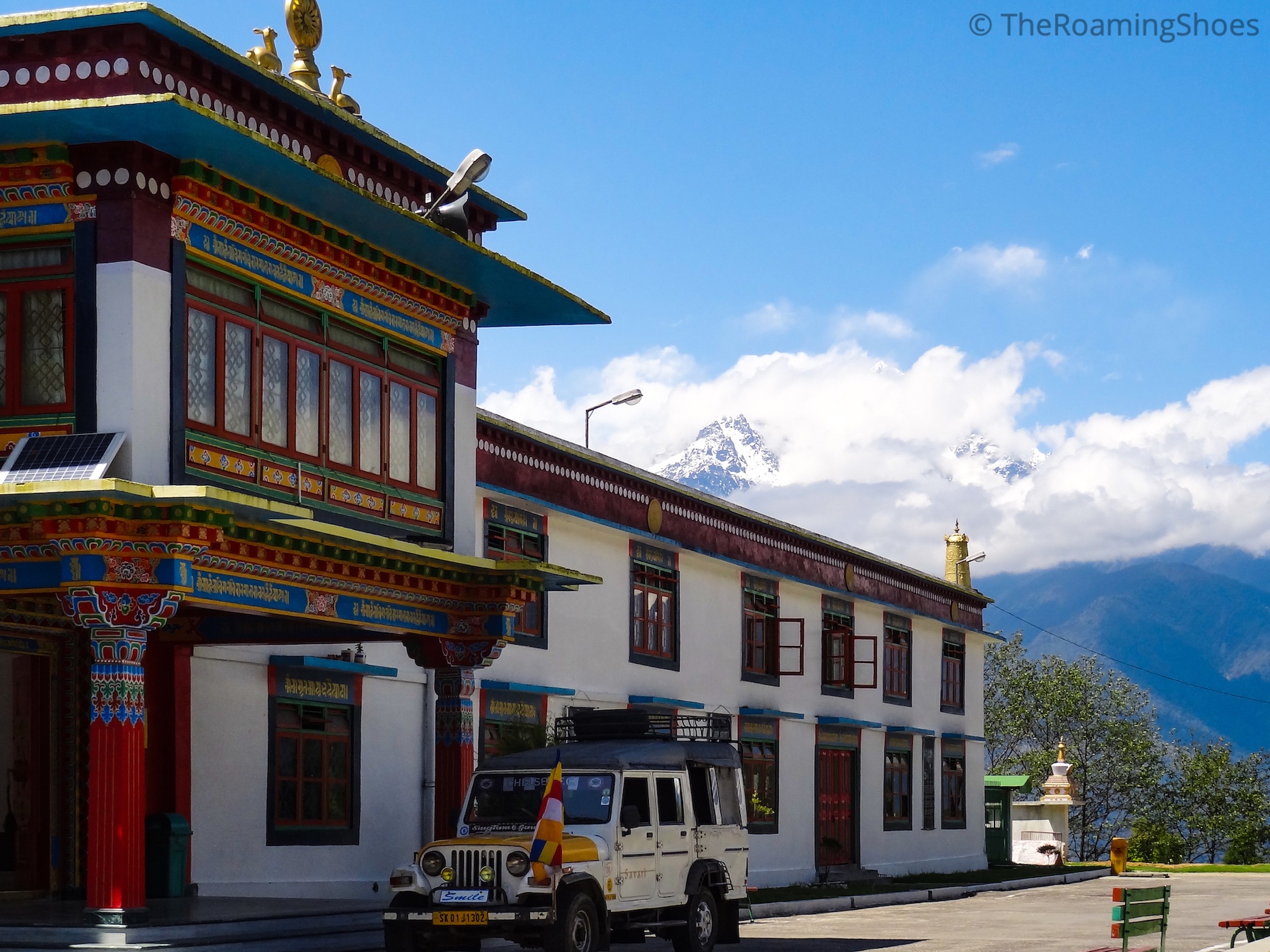 Side view of monastery with Kanchenjunga 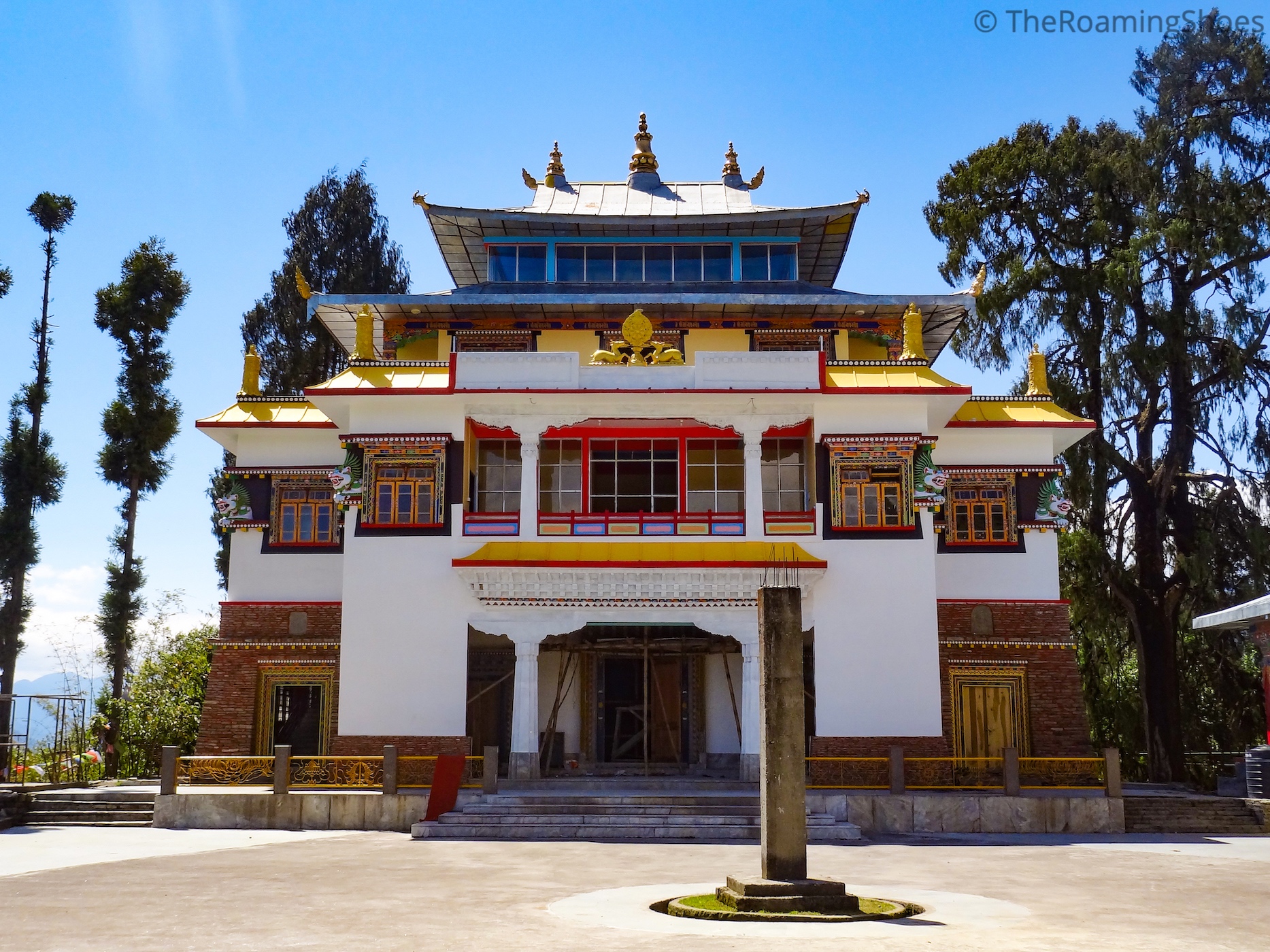 After lunch, we visited the nearby market area which was actually a very small local market and it did not have many options for shopping apart from a few winter garment shops and souvenir shops. But the best part of this market is none of the shop owners ever bothered us when we were looking at the items, they did not even asked us once about what we wanted. All the people were very helpful whether we bought from their shop or not and they provided us information about the vehicles leaving for Siliguri the next day.

It was our last day in Ravangla and we had to say good bye even though our hearts did not want to. Before leaving we had a stroll around the area and that paid off very well as we could see many beautiful and colorful birds in the trees besides the road. Even though I do not know all of their names, I could recognize a few such as the Green-backed Tit, Verditer flycatcher and Blue-fronted Redstart etc. I wanted to stay here forever to breathe the fresh air, to wake up to the view of Kanchenjunga, to sip a hot cup of coffee in the cold morning and to watch the numerous stars at night. At that very moment my heart wanted to break free from all the duties and responsibilities and settle down in this land of dreams. But someone inside me said, “My friend, one day your dream would come true, but not yet, not yet…..” .

Friday evenings are for getting decked up and goin

Everyday is Yoga Day ☺️🤗 For a healthy bod

Some monuments look magical in the evening and Wat

Its always and ever only YOU ❤️ Can't believe

Pool with a view is always my favourite ☺️ Ca

Back from an amazing trip to Coorg and what a love

An afternoon spent with the vintage locomotives an

Visited our fav city on a quick weekend break. And

Forever hunting coffee places ☺️ And this one

Postcard from Gwalior 😊 Also, if you are looki